Artic Pinokio Kindergarten has a NTC license since 2016, which enables learning according to a program that has proven to be one of the most successful in recent years. Namely, the NTC program is made up of various activities and games for children, based on knowledge of brain development and operation, which, as many studies show, have a positive effect on brain development during the period of most intense growth and development, from birth to approximately the age of ten.

The NTC program is characterized by three phases of implementation. Part of the first phase are evolutionarily supportive activities that involve complex motor activities including fine motor skills, dynamic eye accommodation, rotation, balance, and movement. The second phase of the NTC program is characterized by thought classifications, thought series and associations, while the third phase represents the work on the development of divergent and convergent thinking as well as functional knowledge. All three phases of the NTC program are implemented through play, which as a child's intrinsic need is a key factor in implementing the NTC program.

The NTC program has been implemented in several European countries for the ninth year, and has begun to expand beyond Europe. The NTC program is implemented in 17 countries in Europe, and is accredited by the Ministry of Education in seven countries (Serbia, Slovenia, Croatia, Czech Republic, Montenegro, Macedonia and Bosnia and Herzegovina). We are proud to say that our kindergarten has joined this successful team and is currently the only licensed NTC center in Podgorica. You can read more about the NTC Learning Program at www.ntcucenje.com.

You can read more about the NTC Learning Program at NTC official i NTC Montenegro. 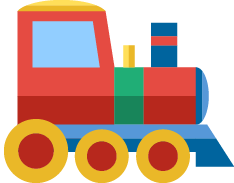